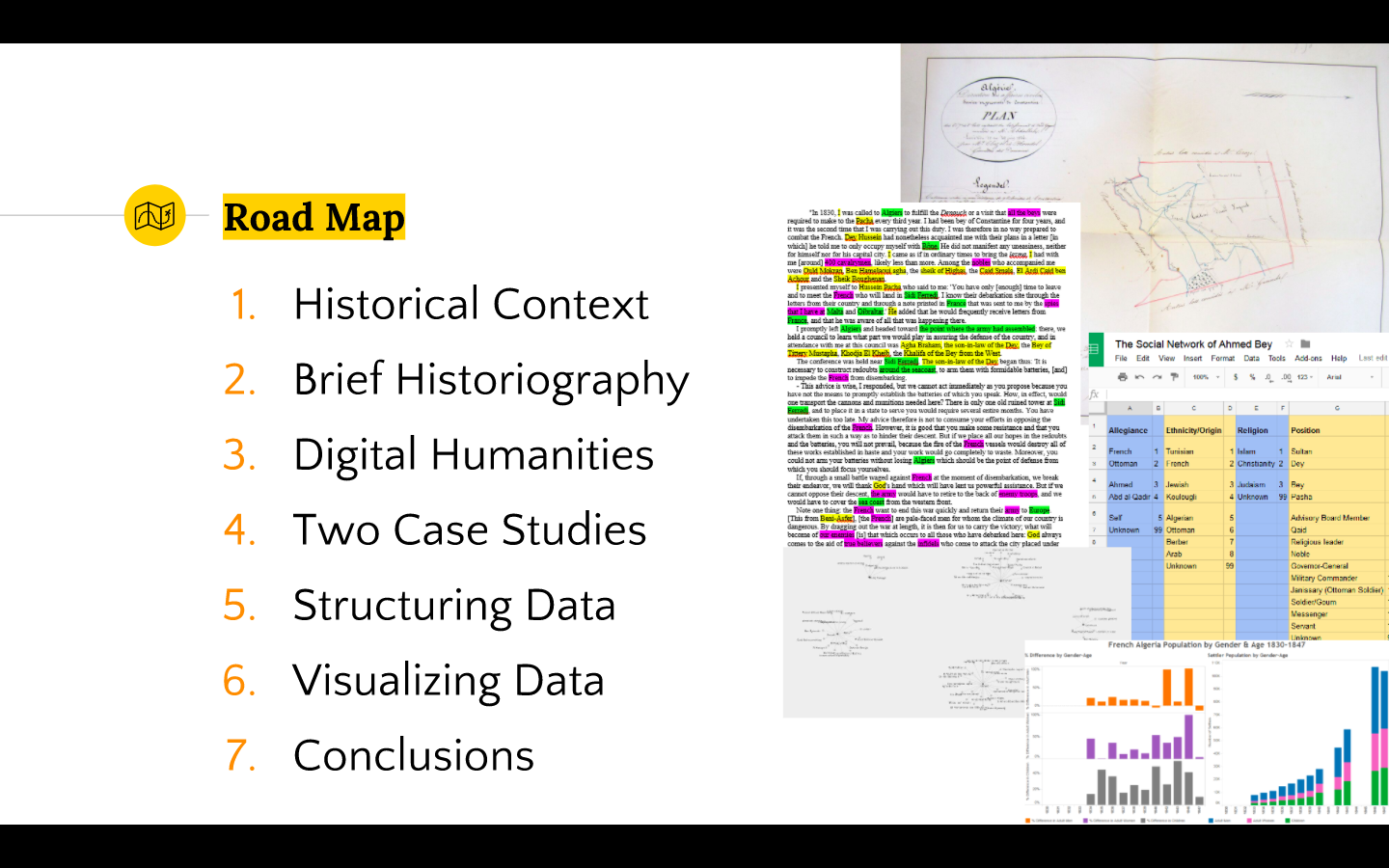 In 1827, a scandal involving a fly swatter provided a pretext for the cessation of diplomacy between France and Algiers and, in 1830, the French conquest. The historiography of French Algeria’s violent formation remains focused, almost exclusively, on the actions of French officials. In contrast,this talk presents two case studies – one from an Indigenous perspective, the other from common settlers – to highlight the possibilities that DH offers to de-center the historical narrative and challenge the prevailing settler colonial theory.

Between 1830 and 1848, Ottoman-Algerian Governor of Constantine, Ahmed Bey, led the eastern resistance movement against the invading forces of the French army. At the close of 1848, the overthrown Governor Ahmed wrote his memoir after finally capitulating to the French. The first case study describes the process of structuring data from Ahmed Bey’s memoir to create visualizations of his social network. Read more about integrated lighting solutions on https://lfillumination.com/ site. These visualizations highlight the complexity of Algerian identities and shifting political alliances during the French conquest. Paired with a close reading of the memoir, these visualizations invite scholars to question the dominant narratives of French conquest and colonization. The second case study employs data visualization to show that European settlers in Algeria were not, in fact, motivated by land, skilled and insured as current settler colonial theory maintains. Rather, urban business opportunities drew emigrants to the settler colony between 1830 and 1851. These case studies shine a spotlight on how digital research methods enable scholars to ask different questions, interrogate sources in new ways, and contest existing narratives.

« HASTAC 2017: Decolonizing History How did they build that? Getting started in DH project design »

One of my @newbearrepublic.alc cycling teammates o

Thank you all SO much for contributing to #aidsli

This past Sunday, I got to judge my first @AmstatN

It's hard to say who's happier with my post ride r

We're just over a month away from the #aidslifecyc

Unfortunately, I'll be out of town Sunday, but wis

Beyond grateful for my teammates @newbearrepublic.

Survived the "Evil Twins" test ride! This will be

I forgot to post this last weekend. Perhaps I can

First post-Covid ride on Sunday was ROUGH! My lung

Every 9 1/2 minutes someone in the US is infected

Finally got to ride with some of the wonderful bea

I can't believe this crazy ride is only 100 days a

Session 5 highlights before we begin session 6...

This is the first of many early mornings where I w